I thought I am done writing about Homeopathy but yesterday when I opened my drawer I discovered 2 more remedies that I should mention. Simply because I used them a lot when kids were little and they were a great help. We used to travel several times a year over several time zones to countries with very different climates and cuisines. I was always bit worried about the flight because kids used to get earaches on landing and I did not know how to help them. It was always worse if they had bit of cold. I did have some medicines from my doctor but they never worked. I turned to Homeopathy like few times before and found Earache tablets from Hyland’s. I gave them to kids one day before travel and then during the flight. It did not take the pressure and uncomfortable feeling away but it did ease the pain. I was delighted when they did not burst into tears and happy for the surrounding passengers, too 🙂 After this experience I used these tablets on the fist sign of earache especially when I knew that I will not be able to take kids to the doctor until morning. It helped many times but I do need to point out that there were couple of times when we could not stop the infection.

The second remedy is Allergy Relief from NatraBio which are homeopathic drops. They are not completely tasteless but they are so mild that kids never complained. I always used them when they had an upset stomach or felt heavy after eating some new kind of food. The drops worked really well and I always had them with me when I traveled. Thanks to Allergy Relief kids tried many new foods, went to many restaurants and had some naughty food without any consequences. Not mentioning that it made my life lot easier during holidays. I also used to add some Probiotics but they deserve a separate post.

And last but not least are PMS tablets from Hyland’s. I think that was the first Homeopathic medicine I tried. It was long before I had kids. I was just too desperate and was searching for something that will take away that unpleasant tension. Finally I did come across tablets for PMS from Hyland’s. I knew I had nothing to loose and tried it. It helped. I was thrilled. Finally I could use something that was not chemical. I used it for years. Unfortunately I do not have a photo of it because when I tried to buy it last time in my favorite shop they told me they will not stock it anymore. I tried online but could not find a shop that would ship to my country. Actually I did find one and they told me that they will let me know when they will get a new stock. That was six months ago… Anyway I think that is all I can share about my experience with Homeopathy. I am aware that it might not be for everyone but as I said: “I am a fan.” 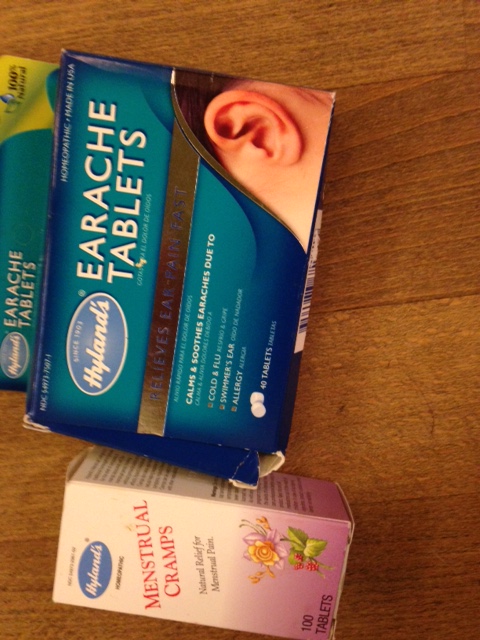 Follow You don't have to read this on WordPress.com